Wrote Mrs. Berkness and Jaime – Played tennis about 1/2 hour but the wind had too much sand in it!  Visited with Palmers awhile 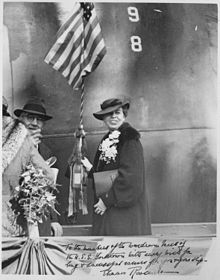 Spectators at Upton Park watching a football match between West Ham and Aston Villa on 4th April 1936, view an eclipse of the sun during play.

The Big Blow Out is released. Porky Pig  helps people in the streets in order to get cash quick to buy an ice-cream soda. Meanwhile a mad bomber is terrorizing the city.

On orders from the German Labour Front, industrial workers who did not vote in the March 29 elections were fired from their jobs as “slackers”.

The airship LZ 129 Hindenburg completed its first transatlantic flight, arriving in Rio de Janeiro. From April 6 to 10 it flew back to Germany

Junior Play matinee and night – We dismissed at 2:30 for it.  Went to town and then played some tennis though the wind was blowing. A Mr. Larcum strolled over and refereed for us.  It turns out that he lives next door to Mrs. Martens.  The play was “Seventeen”  I know the story and there were 4 acts as it dragged a little before it was over!  We (Alyce Claire) took Mrs. Markham.  Later AC and I went to the Busy Bee for soup.  Harriet has put an idea for roller skates in my head!  Should like to brush up on my French, too!  Heard some Institute Officers making fair stabs at it last night at Grady’s – Reminded me of Jaime!

Convicted for the “Crime of the Century.   Richard Bruno Hauptmann is executed by electrocution for the 1932 kidnapping and murder of the 20-month-old son of Charles A. Lindbergh.

Germany sent Britain a point-blank refusal to promise not to fortify the Rhineland.

The British government indicated that it would again apply pressure to impose an oil embargo against Italy unless it ceased its hostilities in Ethiopia, due to the strength of the evidence Britain now had that the Italians were using poison gas.

The shortest pro boxing match in history took place in New Haven, Connecticut when Al Carr knocked out Lew Massey in 10 seconds. This record was equalled in 1946 but not broken until 1984

I think I wouldn’t recommend it.  P.T.A. today!  Letter from MacMillan wanting money on book or book on trail returned.  They’ll probably get the book!  Mrs. Grady’s was closed today because Joyce has Scarlet Fever!  Saw Mrs. Burdette in the P.O.  and she wants me to help in a Mexico project in the Junior Department!  Will I! If I can!  Lorraine Klyng is back in Roswell sans a job – we discussed her going into Hobbs and opening a beauty shop

Here’s what else is happening 80-years-ago today

A young surgeon amputates a mans arm from 50 feet in the air with a hack-saw.  The man was dangling up-side-down between a fallen crane and a girder, his arm stuck between the two objects.   The temperature was zero and he was conscious during the surgery which was lit by flashlights.   The man survived and was taken to the local hospital.

Hitler reviews 35,000 SA troops celebrating the third anniversary of his assumption of power

Police in Spain fired on crowds of leftists attempting to burn churches and convents. 8 deaths were reported around the country.

Ginger Rogers with music by Irving Berlin was released.

Has party for Dramatic Club – Only about 15 there counting everybody but we had a fair time.

The high was -27 in Brooksville, Pa. this morning as the 1936 cold wave continues.

The Battle of Amba Aradam ended in an Italian victory.

Saw “Alice Adams” with Katherine Hepburn and can frankly say I never saw a more depressing picture!  The acting was well done but I don’t care for that kind of story even if it is true to life!

German Film Maker Leni Riefenstahl is on the cover of this week’s Time Magazine. Paraguayan President Eusebio Ayala was overthrown in a coup led by Rafael Franco.

In Geneva, the League of Nations moved to its new headquarters, the Palace of Nations.

After several years of a trade war, the British and Irish government signed a pact reducing tariffs between the two countries. The comic strip The Phantom made its first appearance. Although the Phantom character did not have any superpowers, he was the first to wear a skintight unitard-style costume, the hallmark of many comic book superheroes to come.

The Cold Wave continues.  Roads are blocked and weathermen are confused

Saw “King of Burlesque” and enjoyed it. Nothing else of particular note today. Good day at school. Friday early  1 A.M.  But not in bed for long – Alyce Claire got a call from Gene that Joyce would have her “baby party” right away.  In 15 minutes Alyce Claire had decided that she must go and I would not let her come alone so we both left town at 1:45 A.M. Got there at

3:15.  The baby came at 6 but it was dead.  The less said, the better. It was a terrible shock to everyone, she had been so perfectly healthy.  We left about 7 and got back in time to give 2 exams. I gave Joyce some chloroform but aside from that  I rather stayed out of it – Haven’t been much good all the rest of the day.  My first experience with a birth but I hope it is not my last.  There followed a bitter discussion on A.C’s part on life in general and having families and suffering in particular. Poor girl!  She has been through too much in the last few months.  Wish I could do something for her that would really help.

Lenore, Helen Snipes, Harriet Poorbaugh and I went to see Byrds “Little America”  which is very good. Had supper with Martens and Miss Grady for an hour and went to bed-dead!

In Paris, the trial in the Stavisky Affair ended with 9 convictions and 11 acquittals.

Joseph Goebbels said in a speech in Berlin that Germany’s colonies lost in the Treaty of Versailles must be returned. In this speech he also made the famous “guns versus butter” comparison.

Joe Louis KOs Charley Retzlaff in one round