Went to last classes – skipped Theatre class. Won’t even try for credit there – Maybe? Found out I could leave papers in the office Friday morning – In the afternoon Carsey came and we started out to buy fountain pens – Went to Monte and watched them sell several things at auction but no fountain pens that were suitable.   Went to the Plaza of

Santa Domingo and into the church of the same name – went into the school of Medicine (very old building) saw the building of the Inquisition and the “portal’ where the scribes used to sit and write letters for everyone with quill pens – Now they use Oliver Typewriters of ancient vintage but still write letters for folks and for business men who do not have stenogs – Got on a Churubusco Car and were persuaded to get off at the Convent.   The gardens are beautiful – so dreaming and restful.   I felt as though somebody ought to play “In a Monastery Garden”

and the setting would have been perfect for anything!   The convent itself is well-preserved.   Besides the usual rooms and pictures we saw the parchment song books with large, square, black notes and Latin words – Saw American arms and munition for the Americans and Mexicans fought just outside the convent. There was a goodly array of carriages used by the padres and various presidents; a sedan chair, surrey used by some presidents and different carriages – One old (1908) Packard sedan use by Diaz.    It was so tall that Carsey could not reach the top and the wheels were over waist-high to me.   The convent had two patios that had the proper “monastic” atmosphere: pretty flowers, a fountain, benches, quietness and coolness!   Besides these there was a rose garden! 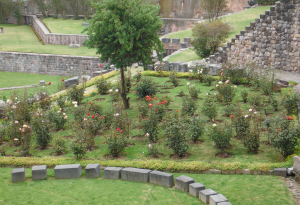 Shrubbery cut into various shapes interspersed the rose bushes and formed arbors.  There was a pool where the padrecitos were want to swim – It was old and yet somehow formal – just enough to make it perfectly delightful.