Just an entry to show that three weeks ago I was just back from Seminole – Hadn’t written to Carsey in that time but today I got a letter from him.   So I wrote n told him just what I thought  of him and cited examples of pure unadulterated selfishness that embarrassed me so.  Don’t know whether he’ll want to answer or not!  It doesnt matter!  Diantha wrote to me to forgive him!  Forgive!

This is Saturday afternoon and at this minute I imagine you are in Van Horn in a bad humor, but it couldn’t be worse than mine.  Yesterday, (Friday) D.D. Dennison told me he had relatives near there somewhere in New Mexico.  I told him I surely  did want to go too.  He said he was going to Brownfield to buy a new car, so I said I would wait for him at the camp, then we would take off and spend the night in Monahaus at the Humble Camp. . He was to come back Friday night and I waited until noon today!! He never did show up! Then I heard of a car wreck and figured out that it was him.  I found a fellow coming to Midland to return immediately, so I came here to wire you.   I hope you got the wire!! After arriving here I found a fellow who assured me that it was not Dennisson involved in a car wreck, but then it was too late to see you unless I found a car or bought one – and then I would have telephone you . I didn’t bring but $61.00 with me to Midland, plenty to be sure, bit not enough to buy a car! Ben bought a new car and I didn’t have nerve to get his, and there wasn’t time to reach you by Train or bus.  So I have just stewed all day. Had I any notion Dennison was never coming back last night I could have taken the train and would have been in Van Horn at 4:00 AM this morning. (Saturday); then we could have gone to El Paso or wherever we chose to go.  But dam it, nothing turned out right.

I may can come up next week-end or if not then, the next.   Can’t tell now and I am in too bad a mood to figure it out.

This Schaubaur pen is worse than post office pens.  I surely wish I could see you!

I love you inspite of the fact that I stood you up in Van Horn.

The first postage stamps bearing the face of Adolf Hitler went on sale in Germany to commemorate the Führer’s 48th birthday. 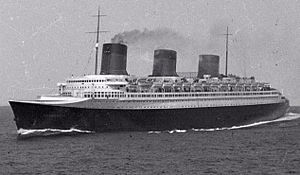 The French liner Normandie crossed the Atlantic Ocean in record time, with an average speed of 30.98 knots

Harry B. Housser is on the cover of this week’s Time Magazine