Went to the National Library in the morning.   Saw new books,  old books, big books, little books, thousands of them. Some entirely of parchment, written in Latin by hand or with hand press. Saw a Polyglok?   Bible in seven languages: Sanskrit, Hebrew, Arabic, Greek, Latin, and others – Went to the National Museum, saw chessmen, jewelry, carriages, and arms – Ate lunch at the Mitla. 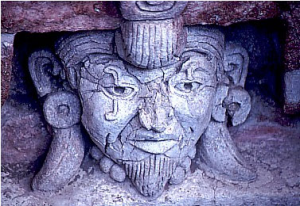 The interior is covered entirely with native Mexican things from the South:  straw matting on chairs and walls, jicaras for lamp shades, zarapes, small straw hats, Milta Gods, loudly painted flowers on black chairs and tables (a la Jicara)and waitresses in costume.  Good dinner – it started to rain so we just sat and talked until it was over – Walked to the Regis and met Dignomitty who invited us to coffee.  Carsey had shown me a copy of Dignomitty’s papers and they joked about it.
Went to supper at Danis.   Had waffles but strangely enough, I wasn’t hungry.  They gave me a polvera*  for Mrs. Ballard.   Met Carsey about 9:45 when it should have been 9:15!   But he was at the corner waiting.  Bless his heart!

We decided it was too late for a show so went to the Red Light District!   West on Gante,  I believe, is the way to get there.   Saw a cheap fair of some sort n the act of closing for the night but nothing particularly thrilling.   Walked back to the Regis – Had met Dignomitty on the way down the Gante (that man is everywhere) and he had said he’d catch up and show us the District but I did not see him again.  Had chocolate at the Regis Drug Store and came home by tren.   Walked by Mrs. Joublaile’s where they were having a fiesta but could see nothing – Bought a taco on Tacubaya carline – When I mentioned how clean the man’s apron was on which he wiped his knife, a policeman heard us and laughed!   You never can tell who is going to understand English in this place.

After a while we bid each other fond farewell – about 2:30 AM!   He leaves at 8 for Monterrey.   Will stay there a day before going on to Dallas!   I leave 12 hours later for El Paso!   Another dream over?
*spanish dictionary